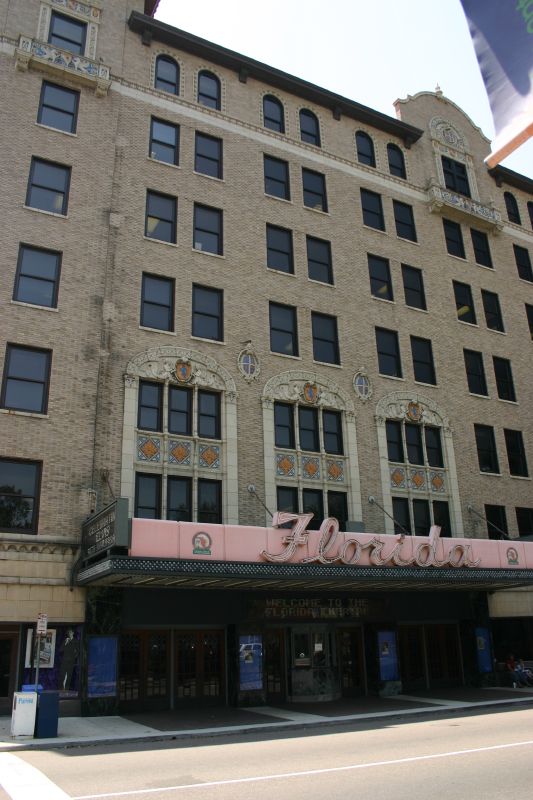 Any visit to the Jacksonville area deserves a stop at the Florida Theatre, for two completely different reasons—one, for the entertainment, and two, for the architecture. Both are decidedly top of the line: the 2014 performance lineup includes such big names as Queens of the Stone Age, Bill Maher, The Irish Rovers, Michael Bolton and John Legend, while the building itself made it onto the American Institute of Architecture’s list of 100 most notable Florida buildings of the last century.

First, some history. The1,918-seat Florida Theatre was built during the ’20s, an era when the term “movie palace” wasn’t just a convention of speech. Ornate buildings were the name of the game, designed in a style known today as Spanish Eclectic or Mediterranean Revival, mixing and matching features of 15th and 16th-century Spanish and Italian architecture for a new generation of American hotels and mansions. Only four movie theaters from this era still exist today in the entire state. This one in particular is features seven storeys of lavish brick, limestone and terra-cotta, topped by a Baroque parapet, two towers, and a tile roof. The north façade and the seventh storey are particularly ornamented, and terra-cotta griffins and mermaids can be spotted by those keen of eye. The interior is doubly impressive—restored in the ’80s to its original charm, the rich reds and gilt ornamentation pop just as vibrantly as they did in the good ol’ days. If you can, get a seat in the loge, the first four rows of the balcony, which still retain their original gold upholstery.

The Florida Theatre hosts over 200 events every year, so there’s no excuse to just drive by and admire the architecture. Have a look at the list of upcoming shows—if you like rock ‘n’ roll, jazz, or stand-up comedy, you’re sure to find something you want to see. In the early days it served doubly as a movie house and a space for live theatre, but both of those are somewhat more rare today. The closest you’ll get to the thespian arts is the occasional opera or ballet performance (and even those are few and far between), but weekends during the summer do give you a taste of the classic Florida Theatre. The building serves as one of the screening locations for the Jax Film Fest, and the Summer Film Series offers Sunday matinees from the golden age of Hollywood for only $7 a ticket. The Florida Theatre features a full bar and a diverse array of concessions, making any show that much more enjoyable.

Mark Keller is a student of English and Theatre at Hillsdale College. His articles on subjects as diverse as Linux software and hammock construction are published widely online.